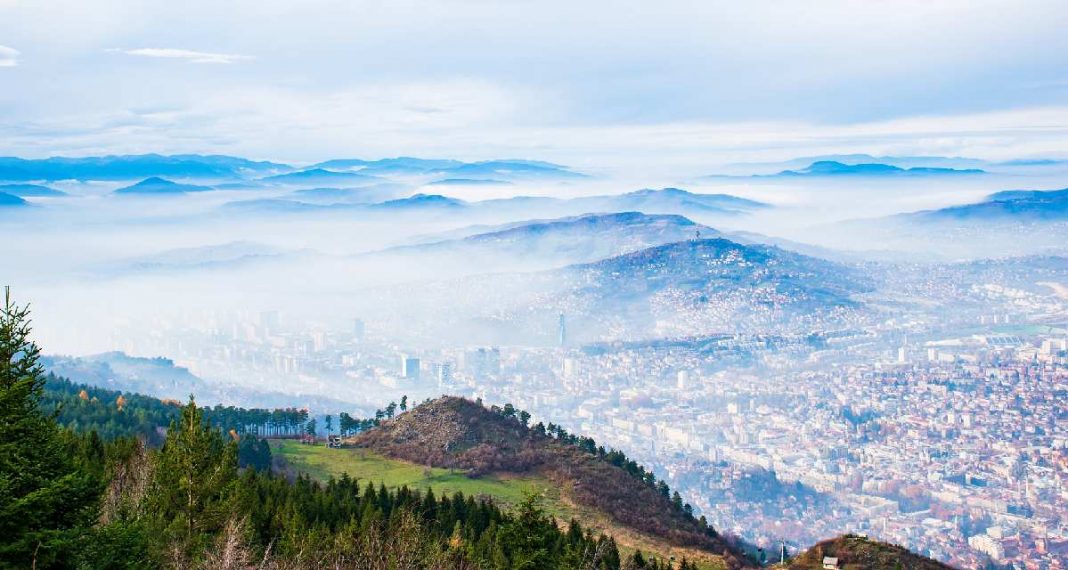 The state of a permanent crisis and dramatic warnings have been a feature of a Daytonesque Bosnia-Herzegovina and domestic and global politicians, journalists, and security specialists address the issue with little progress. In collaboration with the Sarajevo daily Oslobodjenje, Neven Anđelić invited academics based outside the country to offer their views and ideas. Twenty have accepted the invitation. This blog will present a concise summary of the contributions to the Oslobodjenje special “Ja bih BiH”.

“A dangerous crisis is brewing in the Balkans,” reported CNN. The Financial Times warned that “waning western support of Dayton accord is a bad omen for Bosnia.” Politico asked “is this the end of the peace pact holding Bosnia together?” Reuters published the explainer stating that “Bosnia is going through its worst political crisis since its 1990s war.” The High Representative, Christian Schmidt, warned that the country faced “its greatest existential threat of the post-war period”.

“High Representative Says Bosnia Facing Worst Crisis Since Dayton Accords,” Radio Free Europe reported. However, this was a statement by Valentin Inzko, the High Representative different from the current one, and his warning is from 2011, while the other statements are from November 2021. Thus, it is evident that the state of a permanent crisis and dramatic warnings have been a feature of a Daytonesque Bosnia-Herzegovina. Domestic and global politicians, journalists, and security specialists address the issue with little progress as the crisis seems permanent. I collaborated with the Sarajevo daily, Oslobodjenje, and invited academics based outside the country to offer their views and ideas. Twenty have accepted the invitation. This blog will present a concise summary of the contributions to the Oslobodjenje special “Ja bih BiH” (I would Bosnia-Herzegovina). The views expressed are diverse, and I am not in a position to be selective or argumentative by interpreting the ideas of the respected colleagues. However, I will attempt to offer a concise selection of the main points.

The warning reports “in the Western media from November 2021,” observed Armina Galijaš, “mostly take out anachronistic arguments, not adding oil to the fire, but setting it on fire. Everyone uses their five minutes to get back to the center of the action.” Nevenka Tromp noticed “a widely accepted consensus that any new conflict will be impossible to isolate within BiH’s borders and that the domino effect of the conflict will spread,” and pointed that “Serbia has never accepted its post-Yugoslav borders as definitive.” “The ridiculous system of competing ethnic monopolies,” as Eric Gordy described it, “is felt in every life, is a condition for the periodic awakening of fear, and is considered one of the main reasons why citizens are leaving the country en masse.”

The process in which “nationalist elites ‘block’ the political system with the institute of vital national interest (‘ethnic veto’) in order to cover up corruption with a fake fight for national interests,” Mladen Mrdalj named ‘Elite theory’ and argued this theory “underestimates the authenticity of nationalism among citizens.”

Florian Bieber argued that “these politics of emergency make normal, democratic governing impossible, as every crisis suspends normal rules of a functioning democracy, compromise, decisions based on expertise and respective for difference.” In a not dissimilar way, Soeren Keil addresses lack of compromises: “The more paralysed the state institutions are, the more important those decision-levels become in which ethnic elites can unfold their influence without the need for compromise or closer scrutiny on their state capture practices.”

Jessie Barton Hronešová directed the attention to “the interpretation of the main nationalist parties, representation of citizens is reduced to the defence of ‘interests of their people’ that does not translate into any tangible prosperity for citizens but personal enrichment.” Kiel agreed by writing that “these parties, each representing exclusively one ethnic group, have used a mixture of scaremongering and state capture to ensure electoral support.” “The major obstacle to reforms,” Marika Djolai points in a similar direction, “is lack of political will of the party leaders, notably Dodik and Čović, who are supported by Serbia and Croatia and primarily focused on their individual wealth and how protect it by any means.”

Jelena Džankić summed up the problem: “Put simply, the system is complicated, inefficient and expensive; and costs – social and economic – are borne by citizens.” She offered the solution: “The Constitution of Bosnia and Herzegovina does not need to change because ‘someone else says it should’. It needs to change because it does not provide for a functioning state, for equal rights of its citizens.” Francesco Palermo posted the main question: “How to ask the main beneficiaries of ethnic entrepreneurship to move away from such a system, after having provided them with the ignition key of each possible reform?”

Nebojša Vladisavljević warned that “institutional incentives for civic political mobilization will have no effect in a context in which elections resemble censuses.” He described the process as ‘competitive chauvinism’, during which “within each nation … rival parties compete with each other who will appear tough on the ‘other’ side (or sides).” Joseph Marko pointed in a similar direction: “As long as it can control the ethnic division of society, the cartel of power, based on its negative consensus to divide and rule, has no legal-institutional incentives for inter-ethnic competition, let alone cooperation.”

“The first step,” Bieber argues, “is pulling the curtain and realizing that it is the crisis themselves are not accidental, but central to the Bosnian and Herzegovinian political system and help preserve the destructive and degenerative status quo.” Jessie Barton Hronešová considered any change in future “has to be the result of domestic cross-community democratic deliberations, involvement of local and community actors and citizen participation.” Djolai agreed that “civil society can offer solutions, but they lack access to mechanisms of change and decision-making processes, which remain in a firm grip of nationalist political leaders.” In formulating his proposal, Christophe Solioz recalled

Many authors encouraged internal debate in the country. “If the European Union encourages dialogue on the future of Europe, and America on the future of democracy in the world, then BiH should open such an internal dialogue on the future,” wrote Dejan Jović. A new political strategy, argues Joseph Marko, “needs a broad public and inclusive debate for political and constitutional reform to put the ethno-nationalist parties under pressure from all sides: from below – civil society initiatives including peaceful protest measures; from the side – by those multicultural and civic parties …; finally, from above: The European Union must make clear to Bosnian political elites and to itself that it should no longer make the kotow before the ethno-nationalist party leaders.”

“This dialogue – which would have to be free of excessive fears and excessive, unrealistic, expectations – could then lead to a Constituent Assembly,” foresaw Jović, “which would draft a new constitution, given the complexity of Bosnia and Herzegovina’s structure, which is not just a country of “constituent peoples” but and citizens, workers, peasants, students, pensioners, women and men, young and old, people with different worldviews and different life characteristics, those who live in BiH and who are abroad.” Chiara Milan cautioned that “the reform process cannot overlook the grassroots level. It is therefore crucial to engage citizens in the reform process, as they have repeatedly demanded to be politically included and hold the potential to advance concrete proposals for new policies.”

Mareike Fröhlich, and several others, addressed the issue of representative and direct democracies: “The criticism that only direct elections provide sufficient democratic legitimacy cannot apply, with reference to numerous democratic countries with a representative voting system, including Germany.” Palermo located the cause of citizens’ dissatisfaction with the current system: “The growing number of people, their better education and the resulting growth of the will to actively participate has made the traditional forms of representative and direct democracy unsatisfactory to an ever-larger number of people.” Kenneth Morrison urged to consider the timing: “There is no, and there will be no, optimum moment to embark upon negotiations on electoral or constitutional reform, but recent events suggest that delaying it indefinitely is no longer a viable option.”

Jens Woelk described principles of complex orders: “In many federal (and regional) systems as well as in the European Union there is an unwritten principle of federal comity, or loyalty (“Bundestreue”), from which complementary obligations derive for those cases which are not expressly written in the Constitution. The essence of those principles is that no federal unit may behave in a way that damages other units or the State. The principle works both ways, meaning that the State has the same obligation vis-à-vis the units.” Milan proposed a possibility of “the switch to a liberal version of consociationalism [that] might constitute the first step to create more space for cross-ethnic players such as civic parties, challenging thus the normalization of ethno-clientelistic relationships between ethnic parties and voters.”

Palermo introduced additional theoretical elements by reminding of alternatives that “comparative constitutional law is offering, especially what could be labelled ‘participatory constitutionalism’.” His argument was developed further when he described “a conundrum similar to the irreformability of the Dayton constitution is to be noted also between representative and direct democracy, both showing their limits in addressing the challenges of a pluralistic society.” Petra Roter warned that “representation is in itself not a guarantee of effective participation. The issue of representation itself has to be addressed following the principle of free self-identification of anyone to belong or not to belong to an ethno-national community.”

“If both top down and classical bottom up have not worked so far, it might be the time to consider participation as a way out of the constitutional conundrum for BiH,” suggested Palermo. Roter added that “effective participation is a process and an outcome-oriented concept that takes into account also the intra-community diversity, its diverse needs and interests.”

Finally, my modest contribution could be summed up in five minimums that have to be considered by any serious proposal of the reform: the functional state of BiH, the existence of the Republika Srpska as part of BiH, instruments for ensuring the implementation of the electoral will of voters in Cantons with a dominant Croatian population, electoral system that ensures pluralism of ideas and demonopolizes national movements in the interpretation of ethnic and civic interests, implementation of the European Court of Human Rights decisions.

Although this set of opinions is diverse, there are two common arguments presented in most opinions. There is a necessity to include citizens, civil society and non-party, especially non-nationalist leaders in the process of agreeing on the changes. The second common opinion seems to be that the society in Bosnia-Herzegovina is not strong enough to force this process on its own. It needs the lead from the international community.

Dr Neven Andjelic is an Assistant Professor in International Relations and Human Rights at Regent’s University London. He served on the Advisory Committee on the Framework Convention for the Protection of National Minorities – Council of Europe from 2014 to 2018.

You can also read: “Hybrid Regimes of the Western Balkans: Reflection of
a Global Geopolitical Struggle”, by Neven Anđelić (in Journal of Regional Security 15 (2): 263–289).