Home Blog Journal of Regional Security Vol. 16, No. 2 Has Been Published 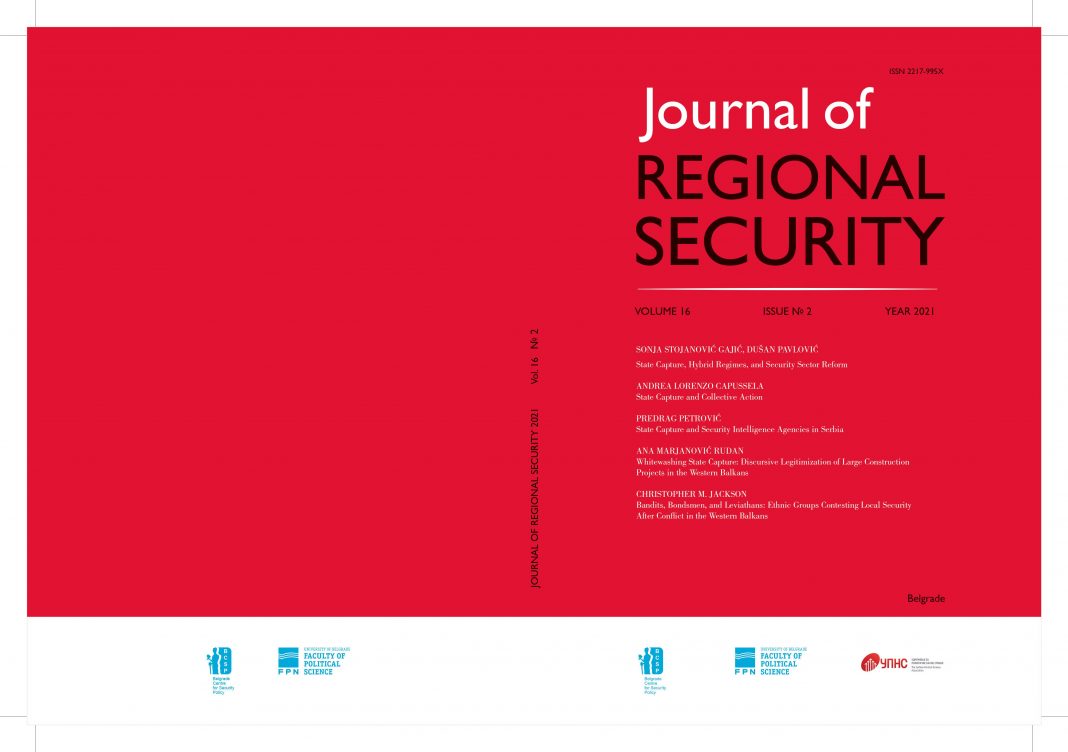 The ongoing global crisis of liberalism, democratic decline and backsliding and the rise of
hybrid and authoritarian regimes is a process that yet needs to be properly understood. The old concepts and theories about democracy and authoritarianism drawn from past experiences can provide valuable insights but cannot capture the full picture. Contemporary authoritarian tendencies have many continuities with the past but also many changes. To make sense of these processes, scholars, activists, and citizens are searching for new and better theories and concepts that can illuminate ‘the nature of the beast’ the contemporary democracies are struggling with. One such concept is state capture. Initially conceived to denote capture of states by tycoons for maximizing personal gain, the concept of state capture has recently expanded its meaning to encompass capturing state apparatus by political parties and informal networks. In this special issue on state capture and security sector governance, the Journal of Regional Security pushes the discussion one step further. Guest-edited by Sonja Stojanović Gajić and Dušan Pavlović, the special issue reflects on the implications of state capture for the security sector governance. Drawing mostly on the empirical illustrations from the Western Balkans, this issue also offers some new ideas on conceptualising state capture and potentially applying them in the analysis of other regions. The special issue contains five articles. After the introductory piece by Stojanović Gajić and Pavlović (“State Capture, Hybrid Regimes, and Security Sector Reform”), the special issue is followed by the articles by Andrea Lorenzo Capussela (“State Capture and Collective Action”), Predrag Petrović (“State Capture and Security Intelligence Agencies in Serbia”), Ana Marjanović Rudan (“Whitewashing State Capture: Discursive Legitimization of Large Construction Projects in the Western Balkans”) and Christopher M. Jackson (“Bandits, Bondsmen, and Leviathans: Ethnic Groups Contesting Local Security After Conflict in the Western Balkans”). Next to these articles, this issue of the Journal brings two book reviews. Georgi Asatryan revews Asia’s New Geopolitics: Essays on Reshaping the Indo-Pacific by Michael R. Auslin, and Roselyne Keya reflects on The European Union as International Mediator: Brokering Stability and Peace in the Neighborhood by Julian Bergmann. We hope that the special issue will stir further theoretical and empirical debates, contributing to better understanding and hopefully arming us to more successfully fight against this worrisome development that undermines our democratic communities.

We wish all the readers of Journal of Regional Security Happy New Year 2022, hopefully
more democratic and less state-captured!